You are here: Home > Food

We had a beach barbecue as a church in early July, at favourite beach Yellowcraigs, one of the main ones near to Edinburgh.

We spent some time digging on the beach with kids.  At one point, Dan drew three different pictures with a spade.  Having done a certain amount of answering ‘What’s that?’ with this particular little boy, it was Dan’s turn to be asked what he’d drawn.

He replied: this one’s Mondrian, that’s Picasso and and the one there is Kandinsky…

The little boy got his own back by doing some digging of his own, creating chocolate cake, chocolate biscuits and other sand-coloured things that could stand for further chocolate food.

You can decide for yourself which was the more creative…

Our first main family gathering of the year was in March, for Auntie Catriona’s 80th birthday.  Catriona lives in Greenock, but also owns a cottage on the isle of Jura, off the west coast of Scotland.

Jura was the regular holiday destination while I was growing up, and I introduced Dan to its delights fairly early on while we were going out. We’ve also brought friends there over the last few years, who have generally gone away sold on the whole experience.

So, you can imagine we were pleased to have a little slice of Jura available in Edinburgh – in fact, there was a whole birthday cake in the shape of Jura.  Catriona was really pleased, and we had fun bidding for different sections of the island by name.  However, we made sure that Catriona got to keep the Craighouse section, the main settlement on the island where the cottage is based.

We also had fun trying out the Italian restaurant in Juniper Green, which we returned to in May for the Boston Mackenzies’ visit. The owner handled the unveiling of the island with great respect!

As part of our trip to Madrid, we stayed on for the weekend, and took a day trip to Toledo.

This is probably our moment to make a plug for the Spanish trains, which got us to Toledo in a very short space of time, and are also very comfortable. It showed us also how the landscape to the south of Madrid does remain fairly flat, although we had some hills to climb within Toledo itself.

Toledo is known for making swords, but also for marzipan – good news for me! We had to take a photo of one of the specialist shops, which had a model of the front of Toledo Cathedral. Given that the cathedral is huge and detailed, that’s quite a modelling job. We were happy to sample some marzipan, just to make sure the batch was up to scratch.

We enjoyed seeing a whole range of architecture, including an early mosque, a Sephardic synagogue and some more classical European buildings. There were also others with Visigoth influences, although we didn’t manage to see them too.

Here’s a couple of pictures to show off the marzipan – and the surroundings it’s made in. 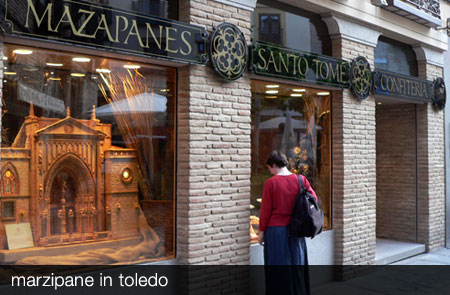 The more chances we have to travel, the more we seem to bring back food…or try out new food.

We’ve been doing this for a while when visiting Italy.  Some of the best options are ones our friends have introduced us to.  A great alternative to crisps and nibbles is the tarallo (taralli if you have more than one, which of course you will), a little loop of seasoned bread baked to a similar finish to bread sticks.

We’ve also tried gnochetti sardi, not actually gnocchi but very small shell shaped pieces of pasta, which are wonderful in a stew.  They cook right down but still have a little bit of a bite to them.

Our May trip to Spain was a chance to try out food that I’d read about for a while.  We bought membrillo, quince paste that is meant to be best tried with sharp manchego cheese.  We also found packets of very thick hot chocolate, and saffron that is much cheaper than in the UK.  The market in Madrid had some fantastic pastries as well as lots of fruit – including grapes with double pips.

We benefitted from my colleagues’ experience when we all met up in the evening.  A few had previously lived in Spain, and so we tried baby octopus (surprised at how good it was), grilled asparagus with lots of salt and pepper (I changed my previous dislike of asparagus) and a fair few other things as part of the tapas experience.

I managed to have some time in Berlin between my induction courses in Germany and Austria.  I knew it had lots of good Turkish food, amongst other things.  My surprise was just how popular the cocktails were…a little reminder of its former decadence in the Thirties?

In Graz, Austria, the local speciality was pumpkin oil, a strong green colour, which is served with every salad.  But it’s also good with meat, and is meant to be very good for you.

When I stayed on for the induction course, food was a key part of the way the centre (a former castle) was run.  You could buy local organic apples etc – but equally lots of cake was available every breaktime.

The honesty boxes were working overtime…but just in case you missed out, they kindly served cake at the end of every lunch time too.  And strong red wine to finish up the course.  Or finish off the tutors, most of whom then had to dash back up to Vienna and the outskirts for teaching next day.

We tried a ‘tourist menu’ in the Trastevere suburb of Rome with a certain trepidation – would it be good? In fact, it was a fantastic meal, allowing us to try some Roman specialities we knew, such as spaghetti carbonara, but also the veal dish saltimbocca, which we didn’t.  It really does ‘jump in the mouth” as the name has it…

It’s just as well I’m writing this after an evening meal.  My apologies if it’s making you hungry.  Or maybe not.  I may have kicked my cookbook buying habit, but I’m still happily cooking away.  My great plan for the Christmas holiday: making my own tarte tatin, having now acquired some pans that will go on the hob and in the oven.  Jamie would approve.

One advantage of trips abroad is the opportunity to try out the local food and drink.

When we had a few days in Graz, Austria, coffee arrived on individual trays, each with an additional glass of water.  We worked hard to try out coffees in lots of different locations across town – one way to visit stylish places on a budget.

Graz is getting well known for its ‘friendly alien‘, the curvy modern art gallery next to the river Mur.  Not as well known, though it deserves to be, is the ‘island on the Mur’, a shell shaped structure that acts as a bridge but includes an outside cafe and an inside bar.  It’s particularly beautiful lit up at night. 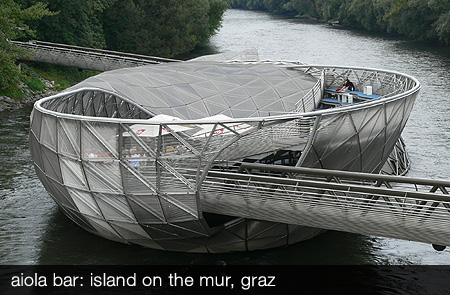 Probably the most beautiful option is the bar near the top of the Castle rock.  This can be reached up a slope around the side, but as the rock also includes a glass lift, and an interior that looks like a Bond villain’s lair, you can guess which option we chose.  It was so pretty we pushed the boat out…and had a hot chocolate instead.

Sadly we’re not gaining any money from Ryanair for our support of Graz, but let us know if you want any more top tips on where to visit.