It sounds like something you create on a synthesiser, but this was actually the sea around the island of Ischia, in the bay of Naples, where we started our main holiday of the year in October.

As the water is less affected by tides than it is around the UK coast, the swell was pretty constant all day, and the sound too.  There was a particular low growl to the sound, and even though the waves did come up the beach by varying amounts, the sound remained the same.  I tried timing it, and the pattern was just under five seconds almost every time.

It was particularly good to listen to at night, and I tried leaving the French windows open so I could hear it as I was dropping off to sleep.  Sadly, my enthusiasm for such a romantic sound was tempered by us both being bitten thoroughly by mosquitoes…

Not so different from the midge bites on a west coast of Scotland holiday, then.  But certainly warmer – even in mid October, temperatures were in the mid 20s centigrade, and even came close to 30 one day. 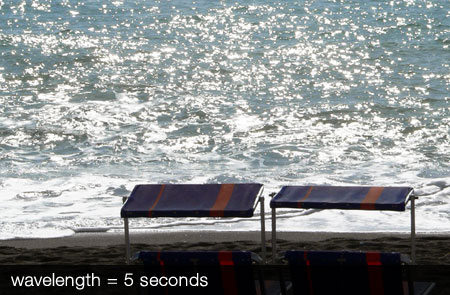 I had previously been unsure about a hot beach holiday – when you’ve grown up with Scottish beach holidays, rain is an expected occurrence at least at some point (and is indeed welcomed to keep the midges off).

But after three days, I started to get the hang of sun loungers, particularly with a very useful adjustable part for shading my eyes.  A pool that was the temperature of a warm bath was also a good incentive!

Our one word of caution: if you want to try Ischia, which we really enjoyed, it seems advisable to speak either Italian or German.  Most of the other hotel guests were German speaking, and the hotel staff switched between greeting you in Italian and taking your order for dinner in German…Further practice for me, but it left Dan out a bit.